So the first thing we said in the New Year was this year will work out and January would be a good month, how wrong could I be. 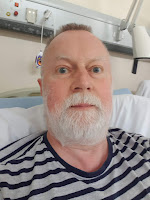 Yes the month ended with a week in hospital.
It all started going wrong soon after the New Year, I knew things were getting bad, I had started a headache that got progressively worse, I was getting weaker as the month went on, sleep was almost impossible. The last week in January I was due to collect my next dose of Chemo tablets, I couldn't cope with anymore pills so I wanted a break for a shorty while, unfortunately events rather overtook my break.
I was very Anemic so on the Wednesday I spent the day in Hospital having a Blood Transfusion, driving home that night I stopped at Morrisons and went to the Loo, the next thing I new I was vomitting up huge clots of blood and by now the headcache was unbearable, as I left I noticed one of the cubicles was occupied, so some poor guy had been trapped in there while my performance went on, so I went home to bed at 6 in the evening. Luckily the next morning after a bit of a surreal night I was woken by my Oncology nurse ringing and as soon as she heard the state I was in she called an Ambulance. It is so difficult on your own as to make the decission to take yourself into Hospital, in hindsight I should have done something much earlier, but I had an appoitment with my Consultant at Clatterbrige coming up where I new I could get to the bottom of the headaches quite quickly, the thought of having to go to my GP and or A&E and then the time everything would take would be to much.
Funny in A&E everyone was concerned about the internal bleeding, which is obvioulsy not good, but it was the pressure in my head that had become unbearable, the pain was unbeliveable and I really was at the point of giving up, vomitting blood folowed by what felt like being hit in the head with a hammer is not something I recommend.
As I had thought a CT scan of the brain showed that my Cancer had spread and the headaches were being caused by the swelling of the Mets in my head, amazingly some Steroids later and things had calmed down, at least now I could be at peace. An Endoscopy followed to see what was going on in my staomach, but I new little about it, the last I remember was the Doctor saying thats 4ml going in, no idea what the drug was but oh boy did it work! I was completely out of it, so much so that sometime later coming round being taken to a Ward, I thought I was being driven somewhere to pick up my car, it was a long time before I grasped where I was and what was going on, Biopsies had been taken from a couple of lumps in my stomach that bled as soon as they were touch.
I spent a couple of nights in a private room which was a godsend, no food or drink for a couple of days made me so thirsty but not particularly hungry, eventually when I was alloweed to have some water I managd to vomit some of it back up with some blood, but that was the Saturday and the last time I brought any blood up, I think I must have brought up around 2 pints of blood in the end and in Hospital I was given 4 pints and thankfully it has settled down.
I spent a week in Hospital and had a CT scan of my chest, abdomen, pelvis etc as well as the earlier head scan so with the Biopsies from my stomach these would show how much the Cancer had sread.
I left Hospital on the Wednesday, I think? To be honest the last couple of weeks have been a blur and I still struggle with what day of the week it is. Several days later I would see my Consultant at Clatterbridge to see what could be done. 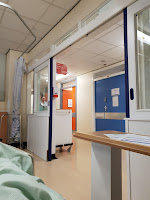