Treatment day today and hooray I have been able to give it a miss, not totally brilliant as its because I feel really rough and my blood pressure is very high but the break will do me good, and the next dose in 3 weeks time I had already arranged to miss as I am going away. There is a guy at hospital that I talk to, he is in the same position as me and 12 years younger but he is still suffering, he said he overnight felt like he was an old man, aches and pains, fatigue and general lack of interest or energy for anything, it cheered me up a bit to realise it is not just me and also someone a lot younger.
A week ago I went to stay with some friends on the North York Moors, gorgeous part of the country. My mate had just bought himself a new Mini, so we spent the weekend in it exploring nearby sites, now I really don't do cars anymore, I wasted far to much time and money on cars when I was younger. First thing I did when I got home was take a trip to Warrington Mini and buy one that I had seen on line, and very nice it is too. 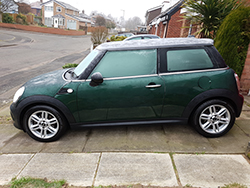 I don't do loads of miles these days and I don't particularly enjoy driving, but the Mini is a very well put together car, very responsive and tight to drive, so I am sure it will get me interested in driving again, despite the fact that I actually detest cars, or is it that I detest what cars have done to people and the countryside!
Despite buying the Mini, the first thing I did the next day was take a train down to Birmingham, doesn't matter how nice a car is, sitting with thousands of others on the M6 and then taking for  ever to drive into Birmingham, just to leave the car all day while you go off walking is not my idea of a good time. 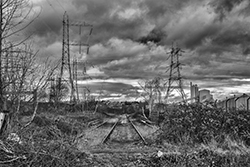 Nr Dudley Port
Yup a walk along an old railway line was the purpose of my trip, this particular line ran from Bescot to Dudley via Wednesbury and Dudley Port, it was closed in the 1990s and technically mothballed, which in this country means abandoned to nature. Part of the route has had some of the undergrowth cut back to allow it to be assessed as a possible extension to the nearby Wolverhampton-Birmingham Tram route, hopefully this will come about, although it will take some years to complete.
﻿As I mentioned at the top of this page I am going away, actually I am going to Hawaii in 4 days time for a month. When I am back in march there will be plenty to write about, so to quote the classic TV series 'The Prisoner'
'Be Seeing You'
Posted by Unknown at 10:35 No comments: