Most weekdays I go to my local RSPCA dog shelter to do some dog walking, I have only been doing it for a couple of weeks, but it is now part of my routine and I love it. Most of the dogs are subject to a cruelty case so unfortunately I can't post any photos. I do love dogs, but it would not be sensible for me to have one, so this is the next best thing, most days I will walk three dogs separately, and each day will be with different dogs as there are around 35 at the shelter. It is very relaxing, the paid staff are very friendly and easy going so apart from the rain today it is very good therapy, and also it gives some purpose to my daily walks into town.
I had a visit yesterday from a couple of ladies from The John Holt cancer centre, this was to arrange for me to be part of their little buds scheme, basically someone comes to see you once a week as a buddy for a few hours, to get you out in the community doing things. I do feel rather strange about doing this as for the last few years I have been acting as buddy to other people, and now the roles are reversed which is not a nice position to fund myself in, but as always there is an upside, I myself could become a buddy to someone with cancer, I just have to wait until a year has past since my diagnosis, this will be at the end of November, so hopefully after Christmas I will be able to support other people struggling, to be honest I will be much happier doing this as I am not really one to go out asking for help, so we shall see.

The Forth Bridge
﻿
Now the weather is taking a turn for the worse I am starting to catch up on a lot of PC work with my photographs. I have around 30,000 negatives, around a fifth of them have been scanned, so I still have a fair bit of work to do.. Through a couple of Facebook groups I have been posting some of my collection of Motor Racing photos from the 1970s and 1980s, I am quite taken a back by the interest they have generated, it is so good to be able to share them with people who either remember the days fondly or are involved in running some of these cars today, I even had some correspondence with a chief mechanic from one of todays F1 teams! It makes all the hard work worthwhile, just a little sad my father isn't around to see its he used to take me to Silverstone and Brands Hatch and he would love all the You Tube clips and photos that are on the net now.

When I started this blog the idea was to chart the progress of my cancer, and how it affected my day to day life, it has certainly changed my life but not in the way I would have expected. 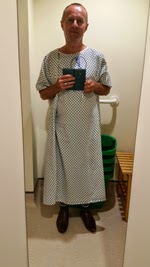 CT scan at Clatterbridge
﻿
I have been incredibly lucky, my scan at 9 months since diagnosis showed no change to the Tumour on my  remaining Kidney, of the three Mets in my Lungs, one is the same size, one is smaller and the other has disappeared altogether. To put this into perspective, this last Monday I went to the funeral of my amazing friend Roz, she was in a better position 9 months ago, her cancer hadn't spread, so when her Kidney was removed at the same time as mine, it was hoped that was the end of it, sadly it returned with vengeance. Seeing the way Roz had to fight every inch of the way for the last 6 months of her life has left me with very mixed feelings, why her and not me?

Near West Kirby, on the Wirral

The river Dee at Shotton
﻿
While I have always been reasonably fit, this past 6 months I have worked very hard to get extra fit, partly through having the time, but mainly through the desire to not let my cancer beat me, I have and still do struggle mentally, although a  lot of that is caused by my position in life rather than just the cancer, and I am now making some life choices to be able to move forward.
So what have I been doing this past month! Unfortunately I have been to another funeral, the father of a very dear friend, who also died of cancer, like buses they tend to come at the same time. I have also been trying to get a PIP claim sorted, but it now looks like that could take up to 10 months from application, from what I have read online, this is a complete shambles and a disgrace, poor Roz died before she even got an assessment for her claim.

At long last I went to see Les Mis, incredible show
﻿
Its not all doom and gloom, apart from walking 5 miles a day, I have been doing a lot of cycling, around 15 a day, including a ride into Manchester the other week, a ride around Chester and a ride back from Southport. At the weekend I came back from a couple of weeks in the south, mostly spent with Sarah in Southampton, where we went indoor Skydiving, now I really don't like heights, but I really enjoyed it and now want to do the real thing, I no it will freak me out completely but I will be so proud of myself afterwards, that's if I survive of course! To be honest me and Sarah were rather lazy, last weekend we watched the whole of Ashes to Ashes, a fab TV show, around 24 hours worth I think, 'He's killed the Quattro, he's bloody killed my Quattro!' Gene Hunt, what a legend.