Cannondale
Yup at long last I bought myself a proper road bike, and very nice it is too. So easy to ride, makes you realise why so many people you see out riding seem to be going so fast, as it does literally flatten the hills. Not only am I pleased with it, but it will be very good for me, extra motivation and  I realised one of the reasons I have been getting so tired is the amount of walking I have been doing, 6-7 miles a day is quite a lot by anyone's standards, so I have been taking to the bike instead, at least cycling you can pace yourself where as walking you either go or stop, and a lot better I feel already. I now have three bikes, Mountain Bike for when I feel like some peace and quiet on the trails, Road Bike for when I want to go further afield and get some speed up and an ancient Road Bike that I use when I am going into town, as I can lock it up on the street and the chances of someone being desperate enough to nick it will be pretty slim.
The garden is looking really good this year, I have made a special effort and it shows, the hanging baskets are now enormous and as for the Sunflowers, I don't know when they will stop growing as some of them are 7ft now!

I have also discovered a really gorgeous Walled Garden not far from where I live, its a real oasis, not huge, but well laid out very quiet during the week and its free to visit, lovely spot to while away an hour or so after a ride on a hot afternoon.

Grappenhall Heys Walled Garden
The other Saturday I went on an organised walk around part of Liverpool, exploring some of the disused railway sites near Exchange and Riverside stations, fab day, and capped off by RMS Queen Mary 2 being moored at Pier Head, it was there to celebrate the 175th anniversary of regular Transatlantic crossings, and also it was the first time since the 1960s that a Cunard ship had embarked fare paying passengers in Liverpool, very impressive and a lovely atmosphere in the city. 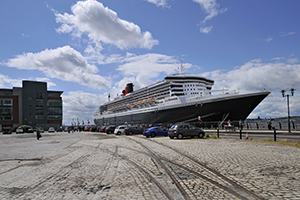 Queen Mary 2 alongside the site of Riverside station
﻿
﻿
﻿