Yea to the Sutent

I think its around 9 months now that I have been on Sutent, my last scans a couple of weeks ago were very positive, all the various lumps and bumps seem to be under control. although as a contrast agent can't be used with the scans due to the poor state of my Kidney the detail is a bit limited and not much can be seen around the Kidney, but still its all going in the right direction.
I have now been able to drop my daily dose of Sutent to 25mg, this is half what I started on, to be honest I have no idea how I coped with 50mg, its been really hard going recently, I don't like to moan because so many people are have a far worse time than I am, but I think it has all gradually built up, apart from maybe the stomach pains, I don;t think there has been any major side effects, its the gradual wearing you down that is the problem, there are so many small problems that added together start to grind you down.
As soon as I new I could drop the dose I felt more positive, I have had a big problem with eatingf the last month or so, I just could not be bothered to cook, so have been eating quite a lot of rubbish, because my taste has been shot apart food all tastes the same, so this past week I have made a conscious effort to eat sensibly and its been ok, I have cooked most evenings and have felt better for it, the next thing I need to sort is exercise, I just have had no energy or inclination, I now have some energy I just have to crack on and do it. 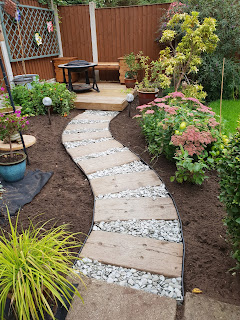 Really pleased with the garden I have pretty much finished it, just need to see what is going to grow and keep on top of it. 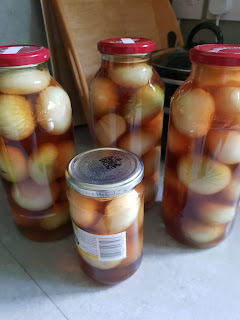 Yup Pickled Onions are almost ready to taste, I don't expect I am probably supposed to be eating them but hey ho you have to have the onions. 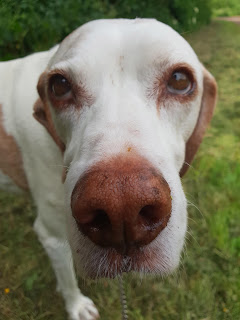 I am now walking five dogs for various lengths of time each week, this is through the Cinnamon Trust who help people who are unable to walk their dogs anymore, great scheme and it stops me getting to serious about having a dog of my own.