Three weeks of taking Sutent and it has not been a good experience. it is obviously working as the lumps on my face had started to get smaller within a week but at what price. I now there are many cancer drugs with much worse side effects and people are suffering way more than I am but bloomin eck!  The first two weeks were fine then almost over night everything started to go wrong, sores over my face, horrendous burning in my mouth when I try to eat anything, permanent nausea, awful stomach cramps, complete lack of energy to name a few, I even get out of breath just climbing the stairs!
I saw my consultant yesterday, and have now dropped the dose from 50mg to 37mg and have gone from 4 weeks on 2 weeks off to 2 weeks on 1 week off, and this is now my week off yipee!! I also came home with a bag of lotions and potions and creams and pills to help with the side effects, hopefully the change in the Sutent dose will make a difference, as I really couldn't have gone on like that, it was starting to make me think is it worth it. My Heart seems to be holding up after the operation so that is good news, I have a Pet scan in Manchester next month just to check over the Heart to make sure there are no left over problems, sadly with all the other problems I have I am not able to take advantage of the healthier condition of my Heart and to be honest at times I don't feel any better than before the operation, but the reality is that without the operation if the Angina hadn't killed me the stress and strain from the side effects of Sutent would have finished my Heart off.

Despite all the problems I have been out a little and went up to North Yorkshire when we had the second lot of snow and very wild it was too. In some ways it was just as well I was feeling so ill and didn't go out as it would not have been wise for me to be out in that cold. 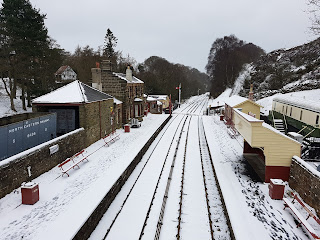 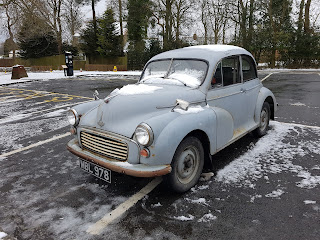 There was neither trains nor Harry Potter at Goathland and the Moggie seen in the car park is apparently used every day by a local farmer and has been for the past 50 years! 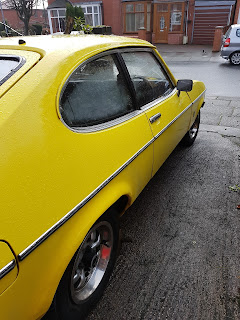 The yellow Capri belongs to a great friend of mine from Bolton and he uses it as his daily car, I have to be honest and say I would not want to rely on either and while the Morris Minor is historically interesting, 1970s cars do little for me as I was brought up driving them and was not impressed in the 70s let alone now, but each to their own and the best of British to them both. 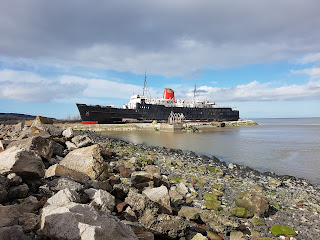 I did have a day out on the North Wales Coast, mainly to photograph the remaining railway Signal Boxes before they were taken out of commission and as it was such a nice day I had a look at the ship 'Duke of Lancaster' which is moored at Mostyn, originally a railway ferry used on various routes to Ireland, after she was laid up she was bought to Mostyn to become a local attraction but years of legal wrangling and disputes has left her with an uncertain future.
Posted by Unknown at 08:03