While in Hawaii I took a local flight from Maui to the Island of Hawaii or The Big Island as the locals know it.
Flying out of Kapalua, a tiny airstrip in the north of Maui and landing at Kona on the  west of The Big Island, I then rented a car and had a road trip to Hilo on the east side, a distance of around 76 miles via the direct route, I choose to follow Highway 19 around the north coast.
One of the big draws for going to the big Island was of course the......actually sorry to admit it wasn't the Volcanoes amazing as they are. The Hawaii Consolidated Railway was based around Hilo and among other routes it built a line up the coast from Hilo to Paauilo around 33 miles and 2 hours by train. The line was constructed just before the First World War, and at the time set a record for the most expensive piece of railway constructed, due to the terrain the line passed through, necessitating many trestle bridges of substantial size and several tunnels amongst other things. When the tragic Tsunami hit Hilo in 1946 almost all of the line was washed away and much of the route was then used to construct Highway 19. 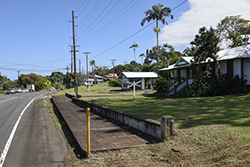 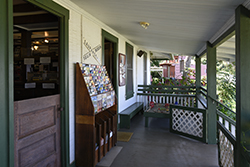 Laupahoehoe Train Museum is a little way north of Hilo and based around the old Station Agents House. Was well worth the visit a lovely museum with loads of information on the route and a very knowledgeable guy running it. The top photo shows the museum building on the right and in the foreground the remains of the platform which is now right alongside Highway 19. 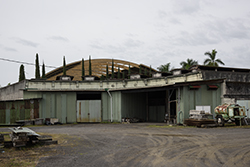 The Semi Roundhouse in the photo was the main Locomotive shed for the Hawaii Consolidated Railway, and somehow it has survived, it is in private business use and is built from concrete, as with most concrete buildings of the period it is in a poor way so how much longer it will stay standing I don't know. People are aware of its historical importance and have come up with ideas to re use it, the owner seemed an approachable guy even if he was not impressed when I went inside, as he pointed out there is a lot of concrete that falls from the roof! So who knows what will happen, but I can add it to my list of Loco Sheds I have photographed. Yes I know I am a little strange, as my friends constantly remind me. 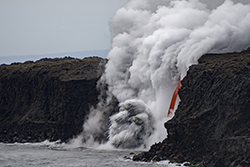 Yes I did visit the Volcanoes and pretty amazing they were too, more about then next time.