My house and other animals 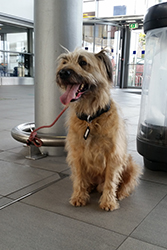 Spike
Very little dog walking over the past four months or so, but I have fostered a couple, Ben was only for a week, just to give him a break from the kennels, but Spike ended up nearly six weeks. Spike had been adopted but after a month or so he was brought back because he had eating issues, what dog doesn't! So I took him in until we found a new permanent home. To be fair he does like to eat, whole packs of butter, my salad and even bean bags, but he was left in a garden for a long time, only been thrown scraps now and again, so hardly surprising. Spike is the most loyal and affectionate dog you could meet, he was so much fun, and once you keep everything away in cupboards, food really wasn't an issue.

Office
Work on the house has ground to a halt at the moment, partly due to being in Yorkshire last week and also because I am bored with it. Once I have been to Clatterbridge tomorrow I am sure I will get on with it, it really wont take an awful lot to finish the upstairs and the stair case, which will only leave the lounge/diner, but I did decide to sand all the upstairs floors and staircase, so that just needs a final sand and sealing, which is one of the messiest jobs, hence why I am baulking at it, a week or two and it will be done. bit of wood work to paint, skirting to fit, finish the floors and I will just be left with the lounge, ok so the lounge is a big area, but I will have the end in sight. I can easily say this is the last lot of decorating I will ever do.﻿
﻿
﻿
Posted by Unknown at 09:33